Bitcoin has struggled to recover as a blood bath continues to pound the cryptocurrency markets. Investors' remaining fearful about the US Federal Reserve's next decision on benchmark interest rate is one factor that continues to affect sentiments in the industry.

Growing direct correlation with US stocks is another development that continues to pound price action in the cryptocurrency market. As the equity markets led by the NASDAQ continue to register losses in one of the worst runs in years, cryptocurrencies led by Bitcoin have also struggled to hold above key support levels.

Bitcoin has continued to post lower lows after failing to find support above the $40,000 level. BTCUSD has since pulled back to the $38,900 level after bouncing off the $37,600 level, which is emerging as a short-term support level above an ascending channel. 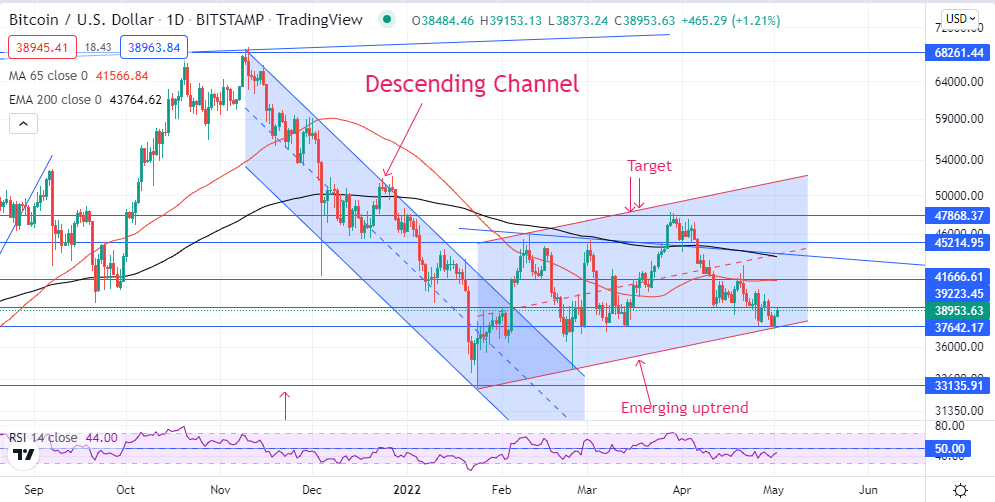 Bulls will have to defend the $37,600 area to avert the risk of BTCUSD edging lower in continuation of the long-term downtrend that began late last year. Above the critical support level, the flagship cryptocurrency could make a run of the $41,666 area seen as a key resistance level. However, BTCUSD remaining under the $40,000 level leaves it susceptible to potential losses.

In recent weeks, Bitcoin has experienced significant losses on the dollar, strengthening to two-year highs amid growing expectations that the US Federal Reserve will hike interest rates by 50 basis points. The central bank is under pressure to hike rates to combat runaway inflation.

The prospect of the FED hiking rates has continued to fuel fear among investors depicted by the sell-off in the equity markets. The NASDAQ has already posted its worst four-month performance since 1971 as bearish momentum gathers pace. The sell-off is already having a ripple effect in the cryptocurrency market amid a growing direct correlation.

As US stock indexes have posted significant losses, so has Bitcoin and other cryptocurrencies followed suit. There are already growing concerns that the FED hiking rates at its next meeting could cause Bitcoin to plummet to the $36,000 level.

Bitcoin is also taking heat in the markets on Billionaire investor Warren Buffett slamming it, terming it as “rat poison squared.” The avid crypto skeptic insists that Bitcoin has no tangible value even in the community highlighting the myriad of use cases and underlying utility. According to Buffett, Bitcoin does not produce anything even though its value continues to increase.

Echoing similar sentiments is US top banker Jamie Dimon, who insists people should be extremely cautious about investing in Bitcoin. While JPMorgan has been warming up to digital sets over the past few years, Dimon has always insisted he doesn't like cryptocurrencies.

Amid the skepticism, Bitcoin and other cryptocurrencies are fuelling a transition from paper money and straight into digital dollars. Cryptocurrencies are increasingly being used to enable cross-border payments affirming their growing utility. In addition, the underlying blockchain technology has also given rise to unique applications that are fuelling decentralized finance while also enhancing supply chain operations.

Bitcoin has also benefited from a surge in institutional investments in the sector. A good number of investors have turned to the flagship cryptocurrency to hedge against runaway inflation. In addition, the volatility associated with digital assets has also proved to be a reliable investing tool for investors looking to profit from significant price changes.

There is no doubt that Bitcoin remains under pressure after struggling to find support above the $40,000 level. Dollar strength and investors shifting from speculative assets has hurt the cryptocurrency sentiments. However, crypto's volatile nature means the coin could bounce back in the near future.