The British pound lost against the dollar after the Bank of England (BoE) maintained the interest/ bank rate decision at 0.10%. While it was expected that the BoE would leave the bank rate unchanged, the inflation rate has increased.

UK’s CPI stands at 2.1% (+0.1% point) above the target at 2.0%. According to the Monetary Policy Committee (MPC), the bank rate could not be increased until economic activity picked up and sustained a permanent surge in demand.

Further, the surge in CPI was attributed to recent developments in the pricing of fuel and energy sources around the globe. The MPC also voted unanimously to allow the UK government to proceed with the quantitative easing (QE) programs of purchasing bonds at £875 billion.

Additionally, the central bank would maintain £20 billion worth of non-financial investment-grade bonds (bringing the total QE to £895 billion).

Continuing jobless claims in the US dropped 4.07% from 3.534 million to 3.390 million. The claims beat estimates that stood at 3.470 million, indicating a resurgence in the employment sector.

The decrease in initial jobless claims was higher in states that dropped the $300 weekly federal payouts. In the 26 states that chose to terminate the insured unemployment benefits early, there was a 17.8% drop in the initial claims. More jobs have been added in states that have lifted coronavirus restrictions, such as California and New York. 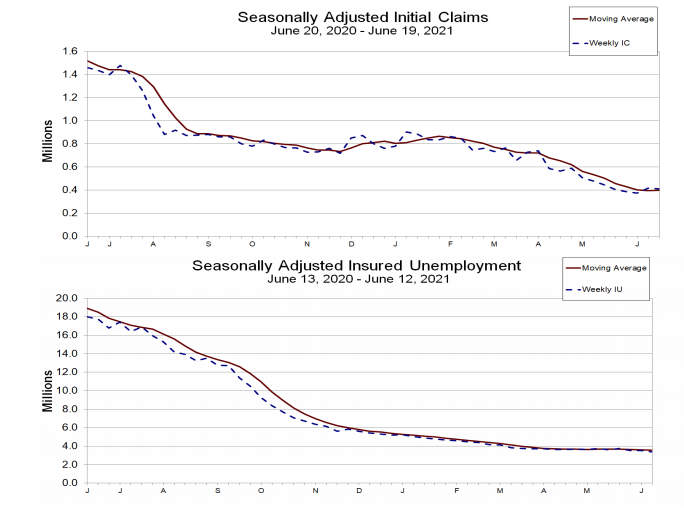 Q1 2021 saw the real GDP rose at an annual rate of 6.4% in tandem with analyst forecasts. The growth rate in Q4 2020 was 4.3%, indicating a positive recovery of the economy amid the ongoing Covid-19 pandemic. Higher GDP gave a mark of approval to the government’s response to the pandemic regarding the stimulus payments.

Monthly records also show that stockpiles of retail inventories (excluding vehicles) gained 0.9%, while wholesale inventories surged 1.1% (MoM). The trade deficit rose 2.8% to $88.1 billion in May 2021 (MoM) from $85.7 billion. US imports stood at $232.4 billion while exports were $144.3 billion. This deficit worked negatively against the dollar.

The GBPUSD pair looks to break the downward curve and begin an uptrend. It is likely headed towards 1.3983 from a low of 1.3916.

The pair is moving below the 9-day EMA at 1.396, but there is a modest increase in buying volume. The 14-day RSI shows the price has moved above the oversold region at 36.37, giving space for an uptrend. We may still see a potential downside towards 1.3811 as the price stabilizes.