What Is S&P Rebalancing and How It Works

The Standard and Poor (S&P 500) is a stock index that tracks the performance of 500 large-cap companies in the US. Its performance acts as a benchmark of the overall market and the health of the US economy as its holdings constitute the biggest companies in various sectors.

It is commonly used by financial media and professionals to gauge how the overall market is doing and how it is likely to do in the future. It also acts as a benchmark for mutual funds and Exchange-Traded Funds.

The index works by simply tracking the market capitalization of the companies listed. There is a committee tasked with selecting each of the corporations that are to be listed based on liquidity, size, and industry.

For the listing, a company must be in the US and have an unadjusted market cap of not less than $13.1 billion. Additionally, a company must have at least 50% of its stock available to the public. It must also have posted quarterly earnings in at least four consecutive quarters.

Is the S&P balanced?

While the S&P 500 is supposed to be a balanced market index with each stock having the same impact on the index, that's not always the case. Therefore, it is not a well-balanced portfolio as some stocks tend to have a bigger impact on the index's overall weight than others.

Conversely, it is more of a momentum-based index rather than a passive one. As some stocks pick up steam, they become large overall performance components. The larger the stock in terms of market cap, the bigger the impact it is likely to have.

Individual stocks and sectors in the S&P are not equally weighted. Therefore, whenever one sector outperforms others, it tends to have a significant impact on the overall index. Similarly, whenever a large stock or sector underperforms, it tends to take the market index lower.

The unbalanced nature of the S&P 500 is affirmed by the fact that the largest ten stocks make up 30% of the overall index. Additionally, eight of the largest stocks are of tech-related companies. 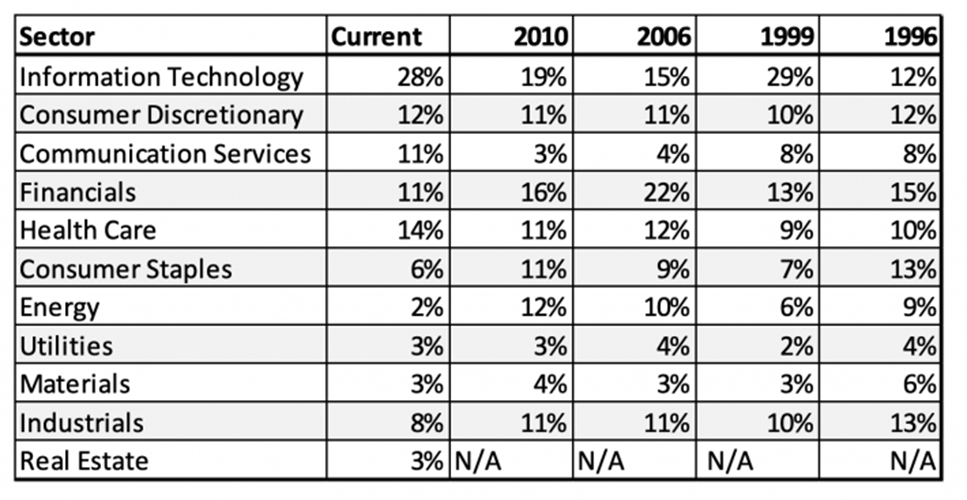 The chart above clearly shows that in 1996, the S&P 500 was nearly balanced, with most sectors accounting for about 10% of the index weight. In this case, no sector stood out or had a significant impact on the unit's overall performance.

In the wake of the technology boom in 1999, things significantly changed, with tech stocks accounting for 30% of total weighted volume. In 2006, a major rebalancing took place after the S&P 500 turned bearish. The implosion that took place in the tech sector resulted in the rebalancing that saw financials account for the most weight at 22%.

However, technology stocks have taken over amid the tech boom in recent years. They now account for the biggest share of the index at nearly 30%. The dominance of Apple, Microsoft, Google, Amazon, and Tesla has often aroused concerns about the S&P 500 status credibility as a gauge of the overall economy and market. It's common to find investors questioning whether the index paints an actual picture of the overall market while only five stocks account for the biggest share of its value.

Rebalancing often results in the constituents of the S&P 500 being adjusted to make sure the index's overall representation is in line with its ultimate goal. Stocks that do not meet the listing requirements are removed, and those not listed that meet are added.

To ensure the index is balanced, the select committee rebalances it quarterly. The rebalancing act takes place in March, June, September, and December. In this case, new companies that meet the eligibility requirements are usually added. This happens after companies that fall below the threshold are removed. 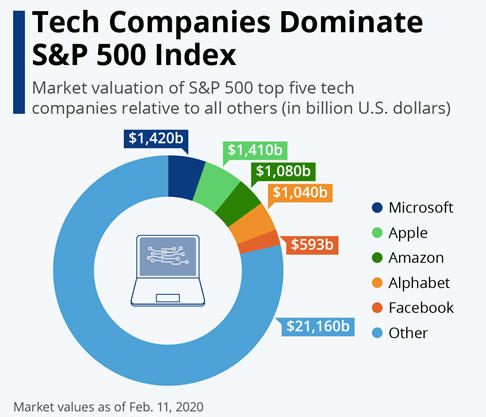 Market performance is not the only thing taken into consideration when rebalancing the S&P 500. There are corporate and regulatory events that can lead to the rebalancing act. For instance, whenever a company is delisted and no longer listed in any major market indices, it is also removed from the S&P 500. In this case, its weight is usually redistributed to other companies in the basket

In addition, whenever a listed company splits its stock, its weight in the index must be rebalanced according to the impact the split will have on its value.

Given that so many investors and funds track the S&P 500, any rebalancing that comes into play often triggers extreme volatility. Therefore, investors pay close watch to such events as it goes a long way in influencing the kind of decisions taken in rebalancing investment portfolios. In most cases, attention is mostly paid to the stocks going into the index and not those going out.