Demand for Palladium May Subside in the Long Run

In just five years, Palladium has risen to become the most expensive/precious metal overtaking gold in the process. Palladium opened trading at $2,369 per ounce on 31st December 2020, about $470 higher than gold. Besides making catalytic converters for cars, Palladium is used in hydrogenation, jewelry making, e.g., watches and medicine. The use of Palladium has shifted over the years with the advancement in the automotive industry. This advancement may turn against Palladium in the long run, especially as the world moves into adopting electric cars. 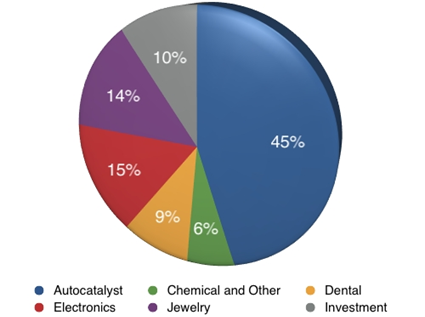 Approximately 45% of the metal is used as an auto-catalyst. This position means that the high demand for Palladium is directly proportional to the number of cars sold in the market. Additionally, the price has increased as supply is currently below demand.

Palladium is used extensively in gas-powered engines to reduce the emission of greenhouse gases. The global push to move from diesel-powered to gas-powered machines has increased the consumption of Palladium over the years. In the US, approximately 9 million barrels of motor gasoline is consumed per day in the transport segment. As of the second quarter of 2020, about 145 billion gallons of gasoline were consumed by motor vehicles, with 136 billion attributed to highway vehicles.

The use of palladium may be short-lived

However, only gas-powered engines use Palladium as catalytic converters. Electric cars do not need to burn fuel. In this case, the rise of electric vehicles and their sale will hurt the price of Palladium.

The sale of new gasoline-only automobiles is scheduled for a halt in the Japanese market in the mid-2030s.  The decision to ban the gas-only engines is a push by the Japanese government to facilitate the decarbonization program. The Asian country intends to have zero emissions by 2050. Greenhouse gas emissions have been marked for elimination. Other markets set to take on this precedence are China and Europe, arguably the world's biggest car consumers.

New gasoline-powered cars and diesel-engine cars will cease to be sold in the US state of California by 2035. The US is keen to follow Japan's footsteps in a move that will bolster electric car sales. This state controls about 11% of the American car market. Additionally, the incoming Biden administration intends to put up 500,000 charging outlets for electric cars. This move is slated to increase electric vehicle consumption. Ultimately, Palladium's price will subside, seeing that the volume of gas-powered vehicles will reduce.

The biggest producer of Palladium is MMC Norilsk Nickel from Russia. The company is expected to reap from the mainstream switch from diesel to gas-powered engines in 2021. Palladium is mined alongside Platinum. We expect the sale of Platinum also to increase, albeit in a limited fashion. Producers like South Africa are expected to increase Platinum mining in 2021 to keep up with demand.

However, more research is needed to determine if Platinum is ideal for replacing Palladium in producing autocatalytic converters. In essence, Palladium's influence is slated to last as long as climate-change calls will continue to discourage diesel-powered vehicles' production.

In the long run, electric vehicles will dethrone the use of Palladium. These vehicles do not combust fuel, and they lack exhaust pipes. The world will require less Palladium as it shits to electric cars in the automotive picture. However, Palladium will still rule the scene since hybrid vehicles also use the commodity.