JPY/USD: Japanese Yen Reeling From the Effects of the Fourth COVID Wave

The Japanese yen has declined 5.80% against the US dollar year-to-date, with Japan facing the threat of the fourth COVID-19 wave. The yen was trading at 0.009054 as of April 5, 2021, having risen 0.17% a day earlier. The month of February 2021 saw the country reduce its consumer expenditure after extending its lockdown through March 7, 2021. Retail sales also fell through into April 2021, with the prospects of the Olympics growing slim by the day. 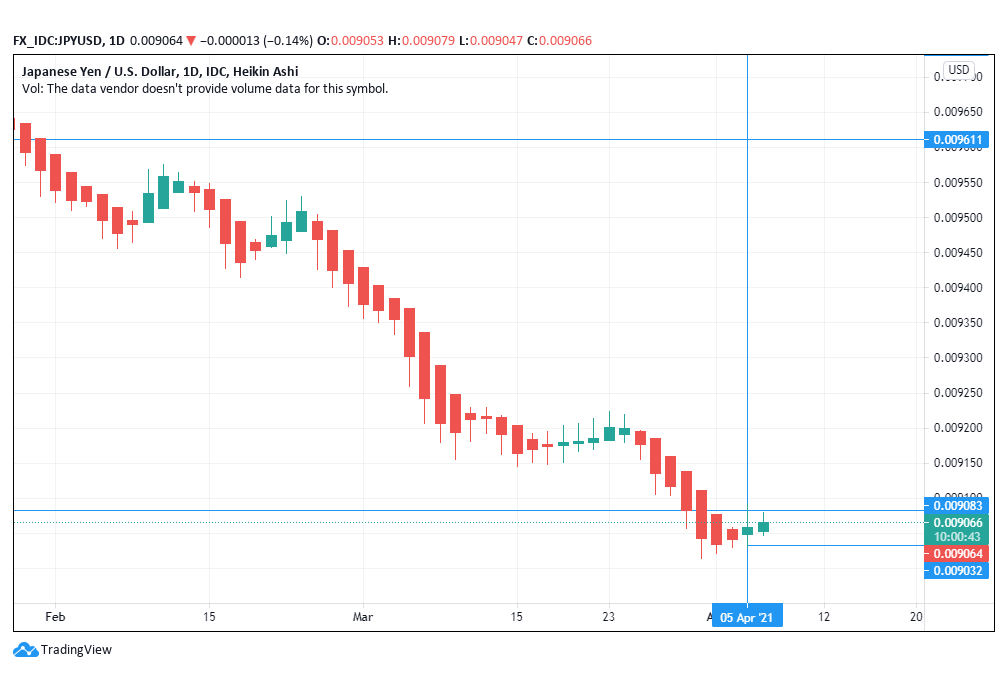 February 2021 saw Japanese household spending decline 5.3% year-on-year after dropping 6.1% in January 2021. New data is expected to be released on April 6, 2021, with optimism favoring an economic rebound. However, the emergence of new coronavirus variants is expected to forestall recovery, with experts fearing the fourth wave. Two states of emergencies have been instituted since the beginning of 2021, but new cases have resurfaced weeks after lifting the latest curfew in March 2021.

Japan’s Premier Suga Yoshihide is scheduled to arrive in the US on April 16, 2021, to discuss how to deepen ties with US President Joe Biden. Matters up for discussion include climate change, economic cooperation, and China’s involvement in Hong Kong. However, the US may not get Japan’s full support against China. Japan is projecting to boost its domestic economy by 2.7% due to the Regional Comprehensive Economic Partnership (RCEP) signed in 2020.

Among the Asian countries involved in the deal include Japan, South Korea, and China. The GDP increase is scheduled to reach the Japanese yen 15 trillion ($140 billion) and create up to 570,000 jobs. Up to 91% of trade tariffs are scheduled for elimination bringing the RCEP’s benefit to Japan close to 10 times better than the Trans-Pacific Partnership (for 11 countries) (TPP-11).

However, the Biden Administration is keen on reviving the phase one trade deal between the US and Japan. The latter is not only the fourth largest trade partner of the US but the highest foreign investor. Japan’s foreign debt holding (FDI) in the US as of 2019 was $619 billion against the US FDI of $132 billion at the same period. 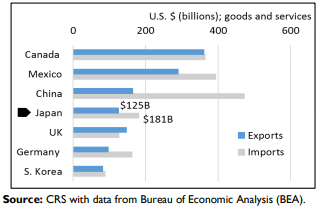 The US-Japan trade deficit as of 2019 stood at $56 billion. US exports to Japan were $125 billion while imports stood at $181 billion. Japan's export of motor vehicles and parts formed a large part of US imports at $54 billion. In 2021, we expect an increase in motor vehicle sales to the US as retail sales stood at a high of 6% in January and February. 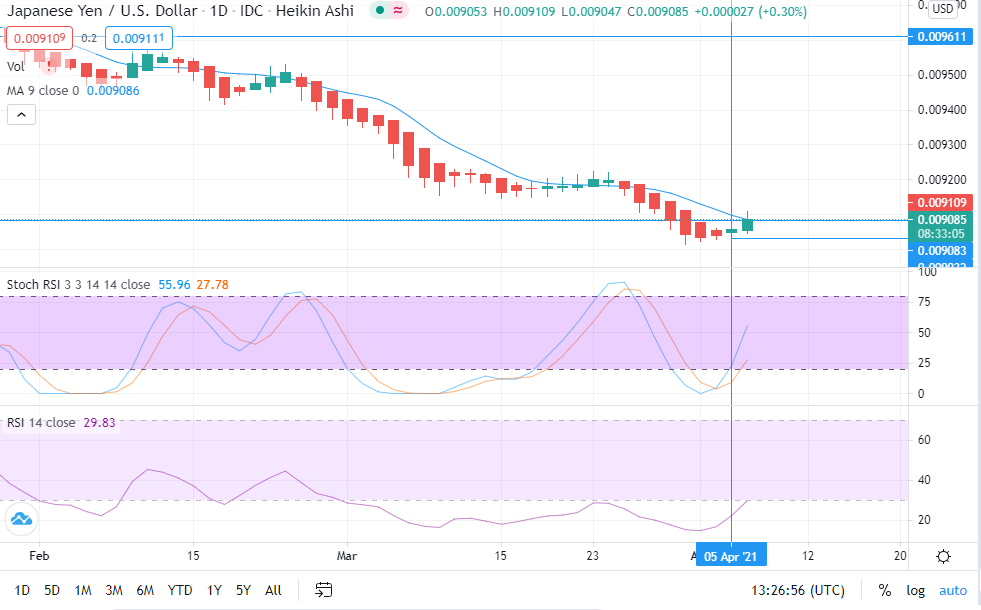 The 14-day RSI of the JPY/USD trading pair indicated an overbought asset at 29.83, while the stochastic RSI supported this position at 27.78. Investors view that the fourth wave may present a threat to Japan's economic recovery as opposed to the US. Intraday trading supported a rising yen against the dollar on April 6, 2021, with the 9-day moving average at 0.009086 against the daily trading at 0.009087.