MyForexPath is a Forex robot that has a reported win rate of 65-70% per trade. The system is compatible with all brokers. Therefore, the devs guarantee that it will duplicate the exact results it demonstrates on their account on yours as well. Furthermore, the EA has a drawdown control system to prevent your account from incurring unintended losses.

We don’t know who the creators of this robot are. This information is not provided in the sales pitch. For this reason, it is hard to tell where the developers operate from and if they are competent or not.

This system works with the trend following strategy. It normally uses algorithms and indicators like Parbolic and MA to identify a trend. It then opens orders in the direction of that trend. In case the entry is unsuccessful or the trend changes, the EA will automatically close the trades it had opened previously so as to fix a small loss. This prevents it from making huge losses when the direction of the trend changes. The robot will also implement certain actions to compensate for any unnecessary losses made as soon as possible.

The vendor admits that MyForexPath has been tested on all the currency pairs it works with. Apparently, all the backtests focus on market data from 2015 to date and show 7+ years of good and steady results. Let’s have a look at one of the reports below: 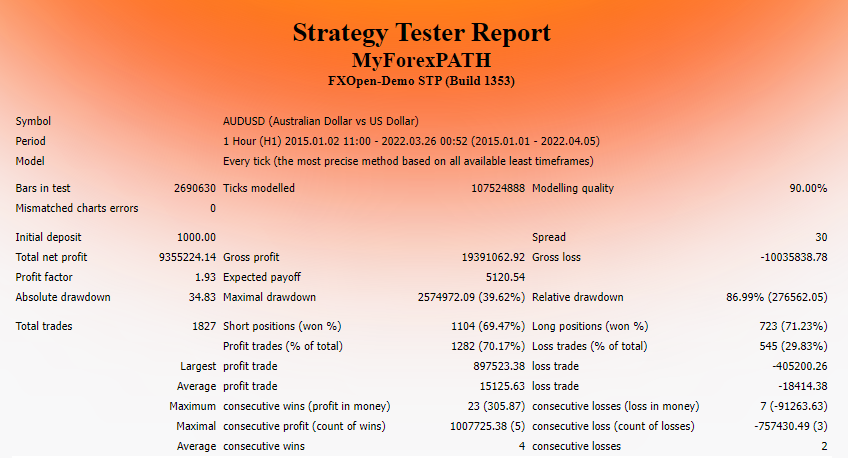 During this simulation period, the EA traded on the AUDUSD currency pair from 2015-2022 using the H1 chart. From a $1000 deposit, a massive profit of $9355224.14 was realized. The profit factor, which was 1.93, also tells us that the system was very profitable. At the time, a high drawdown (39.62%) was generated. This means that trading risks increased significantly over time.

There were 1827 executed trades, with the short positions reporting a success rate of 69.47%. The performance of the long trades was slightly better at 71.23%.

From the above results, it is obvious that MyForexPath is profitable. For the most part, it has managed to make profits progressively since November 2019. As such, the EA began trading with a $2000 balance, and to date, it has increased immensely to $22329.91. This is after the robot made a profit of $20329.91 for it. Consequently, the account’s value has shot up by 1016.50%.

However, the drawdown is 37.61%. It indicates that risky trading is involved. By comparing the drawdown rate with the monthly profit rate (8.41%), we realize that the EA has a poor risk/reward ratio of 4.5:1.

The EA has already conducted 656 trades on this account, attaining an average profitability rate of 65% in the process. We also see here that the system loses more than it wins as it has a higher average loss (-72.51 pips) compared to the average win (32.76 pips). The EA has also made losses amounting to -2930.8 pips. There are 203.80 traded lots. 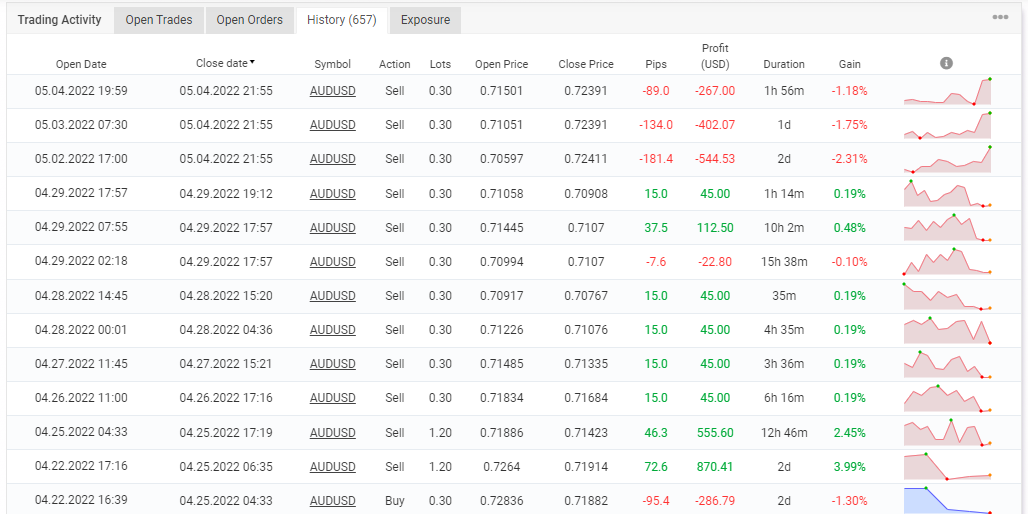 Some elements of the grid strategy are present. The EA also works with large lot sizes and has made some huge losses recently.

We could not find any user reviews for this tool on either Trustpilot or Forex Peace Army. There is a high likelihood that traders have not used it on their accounts yet. Maybe we will see customer testimonials in the near future when it becomes popular.

We have established that this EA is lucrative and may increase your capital considerably. Nevertheless, the trading risks are much higher, which makes the system more susceptible to losses. That’s why it generates a poor risk/reward ratio. The lack of user reviews also denies us the chance of knowing how it behaves on traders’ accounts.