Tether – A Stable Rock in the Crypto-Storm!

The single biggest reason for the popularity of cryptocurrencies is their decentralized form. They’re not issued by any government or central bank and are independent form any form of manipulation.

While the crypto market has generated wealth for many investors, one major risk has been that most cryptocurrencies are highly volatile. Several investors believe in the underlying protocols of cryptocurrencies. Still, they are risk-averse to invest in them as the value of these currencies can witness a steep fall in a short time.

One major criticism of bitcoin and other coins has been that they are not backed by a hard asset or, in other words, have ‘no intrinsic value.’ A different set of cryptocurrencies known as ‘stable coins.’ came up to address these issues.

What are ‘Stable Coins’?

Stable coins are cryptocurrencies, which means they are decentralized and open-source, but they are also backed by a reserve asset similar to how the dollar was earlier backed by gold. This way, stable coins attempt to offer the best of both worlds – price stability and decentralization.

So how does this work? Let’s say X is a stable coin backed by the US dollar. That would imply that for every 1 X coin, there will be 1 USD in reserve. So while practically X may trade at any value in the market depending on the demand and supply, its value would never fall below 1 USD because you will always be able to redeem 1 X coin for 1 USD.

Initially, it was believed that for every Tether coin, there was $1 in backing but the developers later revealed that it is not completely backed by the USD but rather 1 Tether is backed by $0.75. Nonetheless, the fact that it is pegged to USD is reason enough to provide stability to the price of Tether, which is critically missing from other cryptocurrencies. 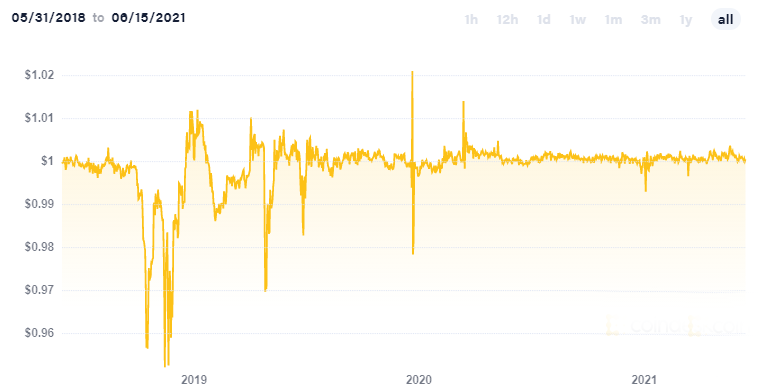 As seen above, the variation in the price of Tether is very low and the least the price has gone to is a little below $0.96. So not just in theory, Tether price has actually tracked the dollar very strictly in practice. 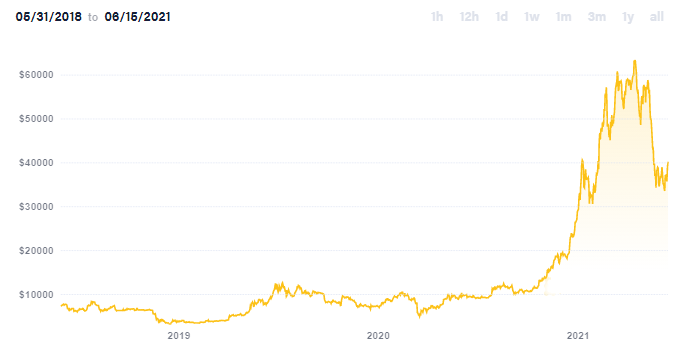 Contrast that with the price of bitcoin, and you can clearly see the difference in price variation.

The market capitalization of Tether is $60 billion and is the 3rd largest cryptocurrency by market.

So many of you might wonder why a cryptocurrency with little price variability and consequently less potential for returns attracts such a large amount of money from investors and users across the globe?

There are two main reasons here.

First of all, let’s say you have invested in Ethereum and made some good returns. But now you feel that ETH might fall, and you want to book your profits and sit tight for some time. So what would you do?

You can sell the ETH and take it into your personal bank account. There you would have to pay transaction charges. Also, once again, should you wish to buy any cryptocurrency, you’ll have to make the transaction from the bank to your crypto wallet.

So what’s the point of owning crypto when you have to keep on transacting back and forth in fiat currency? This is where Tether steps in. Tether offers a reliable and stable way to store your funds in your wallet without having to bring your bank account in the loop. You can convert your crypto into Tether and can then easily convert it back to another crypto as well with low to nil transaction costs.

The second most important part is the ease of transfer and convenience. A number of transactions are simply not possible via fiat or are highly complicated and time-consuming.

Take the example of international transfers. Depending on the country, there are a number of regulations and laws that one must abide by to make international transactions. Also, one must provide a ton of personal information which again comes with a hefty fee.

On the other hand, to transact via crypto, you simply need the wallet id, and there is no transaction fee. Also, there is no need to reveal any personal information, thereby protecting your privacy.

So overall, Tether is quite a unique cryptocurrency. It’s not meant for pure trading or investing but rather acts as a safety bridge for active crypto investing and transactions. Although one must exercise caution given as there have been conflicting reports on how much of Tether is actually backed by the US dollars.

Tether claims that it intends to hold all United States dollars in reserve so that it can meet customer withdrawals upon demand, though it was unable to meet all withdrawal requests in 2017. Tether purports to make reserve account holdings transparent via external audit; however, Tether never produced an audit showing it had the purported reserve.

In January 2018, Tether announced that they no longer had a relationship with their auditor. There were also a couple of lawsuits involving Tether, and there were also claims of price manipulation. Despite all the controversy, Tether has traded very near $1, as seen above, indicating the trust of its users in the cryptocurrency.